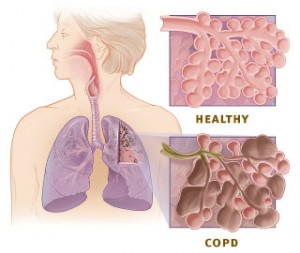 Between 12 million and 15 million adults in the United States say they have been diagnosed with chronic obstructive pulmonary disease. But the actual number may be higher due to under-reporting. (Courtesy National Heart, Lung and Blood Institute)

Direct costs associated with chronic obstructive pulmonary disease in the United States totaled $32.1 billion in 2010 and is set to reach $49 billion by 2020, the CDC reported in a study published in journal Chest.

The study attributed another $3.9 billion to COPD-related absenteeism, bringing the total burden of the chronic disease to $36 billion in 2010. The latest estimate counts 16.4 million days of lost work annually due to COPD and related illnesses.

Private insurance paid 18% of the medical costs, Medicare 51%, and Medicaid 25%, according to the study, which was published online early.

About 15 million people in the United States say they have been diagnosed with COPD, often under-reported and under-diagnosed, though the actual number may be higher, according to the CDC.

In the developing world, poor indoor air quality is thought to play a key cause of COPD, but tobacco smoke remains the leading factor in the development of the chronic disease.

Dr. Earl Ford and his colleagues at the Centers for Disease Control and Prevention (CDC) used national surveys, medicare and medicaid data, and the 2010 census to compile their findings and project costs through 2020.

“Evidence-based interventions that prevent tobacco use and reduce clinical complications of COPD may result in potential decreased COPD-attributable costs,” the study concluded.