Smartphone As a Medical Device: Is It Useful?

Smartphones can easily transform into simple diagnostic tools, such as a heart monitor, ultrasound, otoscope, ophthalmoscope, stethoscope, blood pressure monitor and even a spirometer. It’s been shown that telemedicine can improve outcomes, reduce hospital admissions and ultimately cut mortality rates.Â But whether the adoption of smartphones as remote monitoring tools will become widespread enough to have an impact remains unanswered.

As difficult as I find them, the otoscope and other traditional tools will remain a large part of medical practice for the near future. And to be fair, doctors grew up training with these tools; learning the smartphone physical would come with time and opportunity costs. But doctors should also realize the deficiencies in some of these older technologies and how smartphones can address them.

To demonstrate the usefulness of smartphones as routine diagnostic tools, MedGadget organized a “Smartphone Physical” at this year’s TEDMED in Washington, D.C. Most of the tools were attachments that turn ordinary iPhones into a state-of-the-art ophthalmoscope or an ECG machine.

SpiroSmart, however, used only a user’s lip reverberation and iPhone’s built-in microphone to measure common spirometry values, such as FEV1, FVC and PEF.Â SpiroSmart’s creators, at the University of Washington’s Ubiquitous Computing Lab, say that when compared to clinical spirometers, the app returned a mean error Â of 5.1%. The lab has reportedly applied for regulatory approval with the FDA to market the software as a viable home diagnostic tool.

One smartphone-based medical device that has received not only FDA’s blessing, but also a lot of media attention is AliveCor’s ECG monitor. Cardiologist Eric Topol has used the iPhone-based single-lead ECG to evaluate passengers during onboard emergencies when no other tools were available.

The device wasn’t intended to be a replacement for 12-lead ECGs used in clinics and hospitals. YetÂ citations show its accuracy is remarkable when compared to a 12-lead ECG. The benefit of portability is obvious. And at one-tenth the cost of a traditional 12-lead monitor, a $199 investment in a portable heart monitor, or in a rumored, consumer version, seems like a no brainer. But not everyone’s heralding the dawn of smartphone-based medical devices.

Still there’s no shortage of smartphone-inspired medical devices that promise to make diagnoses easier and our lives healthier. Fraunhoffer’s Institute for Applied Information Technology is set to unveil its latest remote, mobile diagnostic and monitoring tool at Biotechnica 2013 next month. 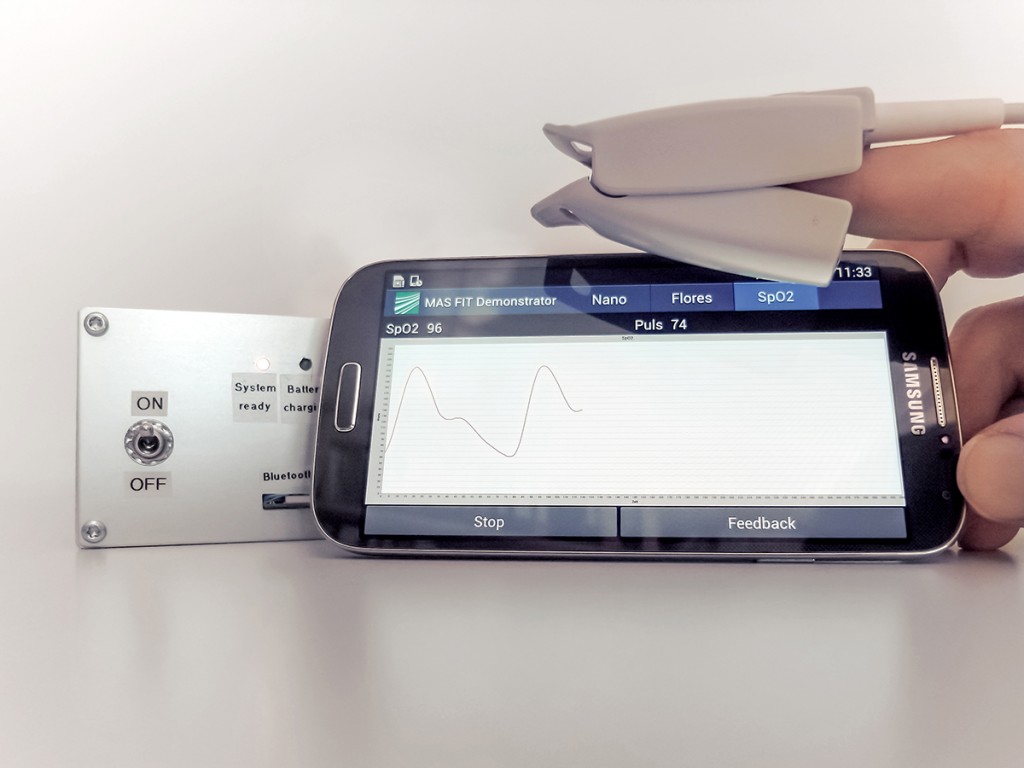 Designed for remote and continuous monitoring of the elderly, Fraunhoffer’s device houses the following:

Data from the sensors are then processed by an app which also transmits the results to the attending physician’s office for monitoring, according to Fraunhoffer.

At UCLA Professor Aydogan Ozcan, a prolific inventor of new imaging technologies, has come up with a portable fluorescence microscopy platform, which along with your smartphone, can detect fluorescent-labeled polystyrene particles that are about 100 nm in diameter. 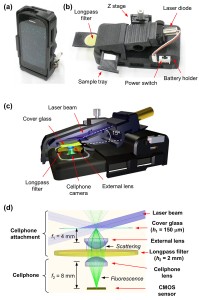 In the study published in ACS Nano, Prof. Ozcan’s team repeated the experiment with individual human cytomegalovirus (HCMV), which can be life-threatening to the immunocompromised, neonates as well as transplant recipients. Individual HCMV virions, about 150 nm to 300 nm in diameter, were also fluorescent-labeled and detected with the smartphone ‘microscope.’

â€¦Â could be used for specific and sensitive imaging of subwavelength objects including various bacteria and viruses and, therefore, could provide a valuable platform for the practice of nanotechnology in field settings and for conducting viral load measurements and other biomedical tests even in remote and resource-limited environments.

A few smartphones and all of the attachments mentioned above could fit in a small carry-on bag which would allow a clinician to bring a mobile laboratory and an examining room to the farthest corners of the world.

Results from smartphone spirometry, like the one offered by SpiroSmart, could easily be used by clinicians to detect sudden changes in condition without a daily visit Â by a patient to a pulmonary lab. It’s not a replacement for clinical spirometry, but a prototype for cheap, daily spot checks for those who would otherwise skip or couldn’t afford such tests.

What do you think of smartphones as medical devices? Share your comments in the space below.