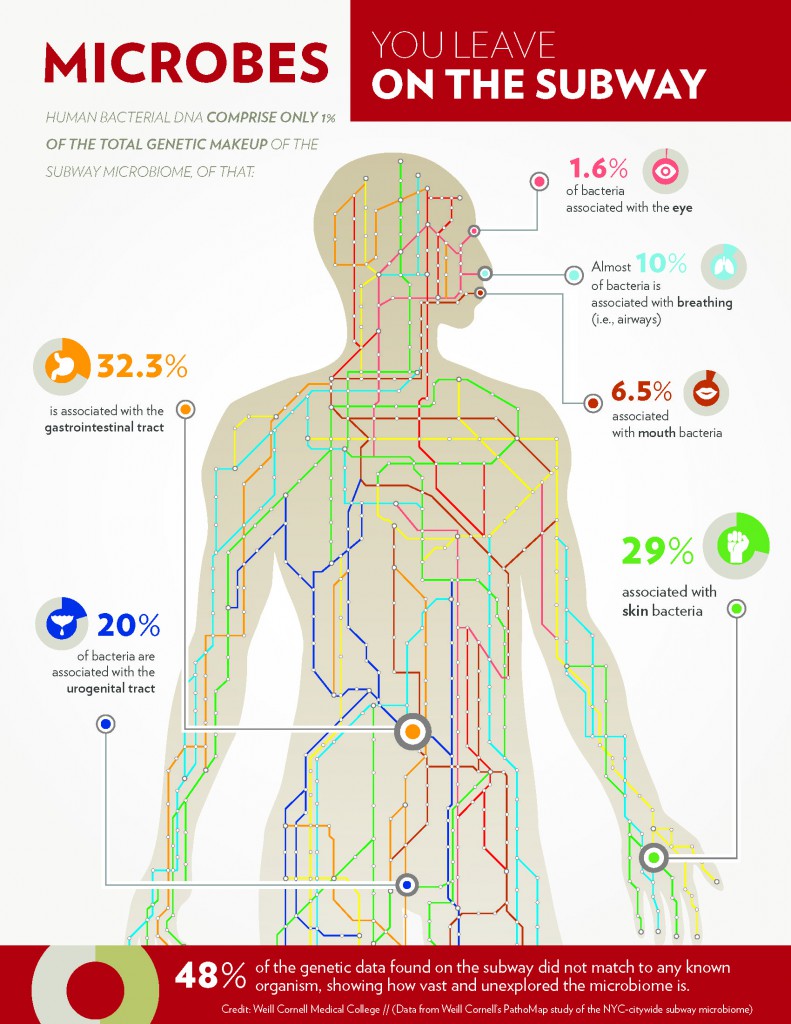 The first-ever city-wide map of microbial diversity shows that half of all DNA on the New York City subway system’s surfaces match no known organism, and that about 10 percent of all sequenced DNA matched those related to the respiratory tract.

Results of the massive undertaking, published in Cell Systems, are part of an ongoing PathoMAP project to create a molecular portrait of New York City.

The majority of the identified bacterial, viral, fungal and animal species were harmless species that were commonly found on human skins or in the gastrointestinal tract. There were, however, DNA fragments of Bacillus anthracis (anthrax), Yersinia pestis (Bubonic plague), Staphylococcus aureus, and live methicillin-resistant S. aureus (MRSA) at some of subway stations.

S. aureus is commonly found on human skins as well as in the airways and doesn’t always cause diseases. Some strains, such as the antibiotic-resistant ones, may lead to complications.

“Despite finding traces of pathogenic microbes, their presence isn’t substantial enough to pose a threat to human health,” Dr. Christopher Mason, the study’s senior investigator was quoted as saying. “The presence of these microbes and the lack of reported medical cases is truly a testament to our body’s immune system, and our innate ability to continuously adapt to our environment.

The researchers also analyzed human DNA samples left on the surfaces of the subway system and were able to successfully predict the U.S. Census demographics of a neighborhood.

The study found mostly African American and Yoruban alleles at Canarsie station in Brooklyn, while they found Mexican, Colombian and Puerto Rican alleles in a primarily Hispanic and Amerindian area of Bronx. In Midtown Manhattan, they noted an increase in British, Tuscan and other European alleles with some potentially Chinese alleles.

“This provides a forensic ability to learn about the ancestry of the people who transit a station,” Dr. Mason was quoted as saying. “[A]nd it means the DNA people leave behind can reveal a clue as to the area’s demographics.”

Weill Cornell’s news release is available here. And the full study in Cell Systems can be downloaded here.

← Prev: 1.2 M Britons May Have Been Wrongly Diagnosed with Asthma Next: Meet the Scientist: Dr. Jonathan S. Bakin →