Birth of the Calibration Syringe for Spirometry 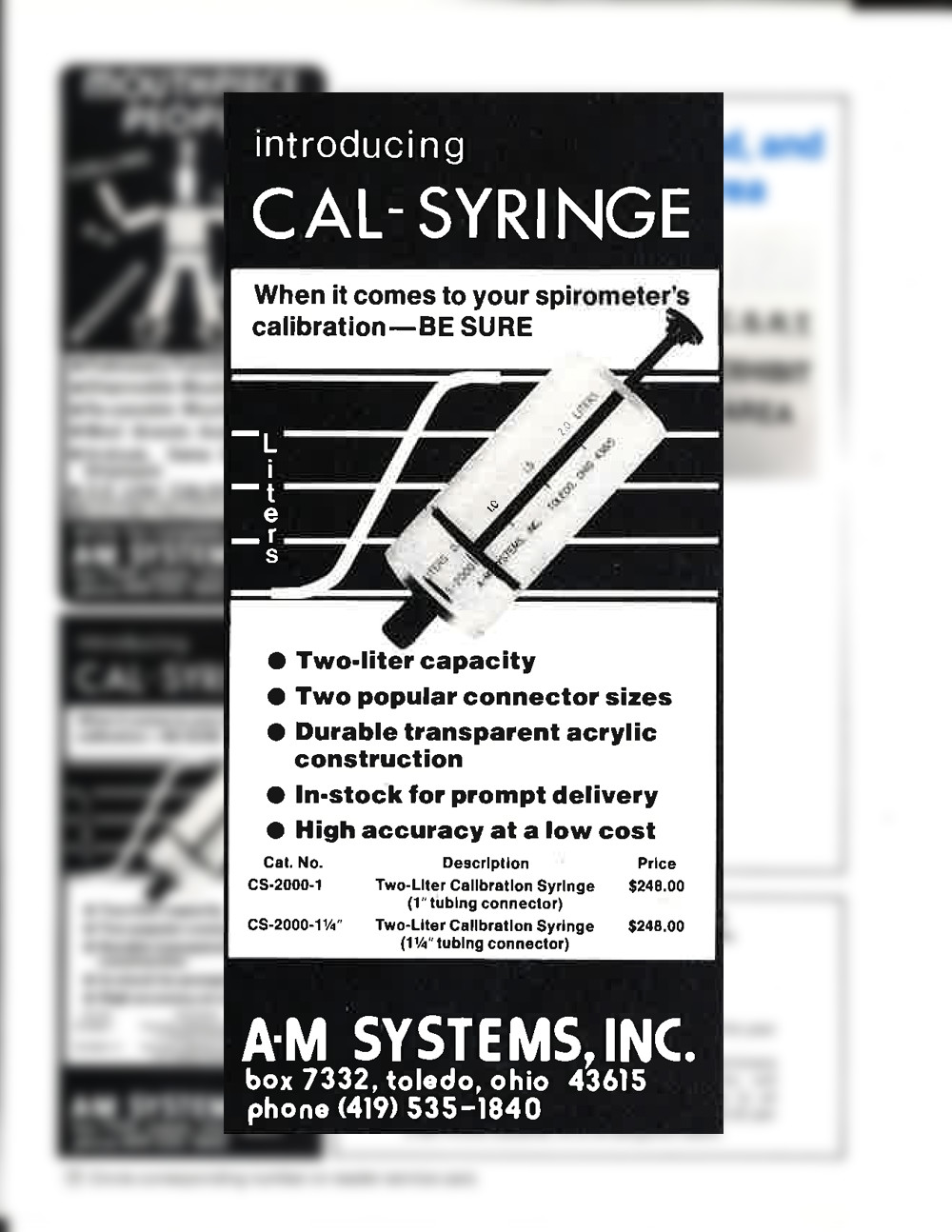 An ad for a calibration syringe we published in the May/June 1977 issue of the now defunct Medical Electronics Equipment & News.)

In 1977, we introduced an acrylic calibration syringe designed to verify that a spirometer was measuring the flow volume correctly. Back then only two connectors were available, and the volume was limited to two liters. And the first statement on the Standardization of Spirometry wouldn’t be published for another two years.

Only two years earlier, in 1975, the Committees on Environmental Health and Respiratory Physiology of the American College of Chest Physicians called for a standardized methodology for measuring ventilatory capacity. The call to action was brought on partly by federal efforts to protect coal miners and ensure healthful working conditions.

The assessment of ventilatory capacity is being used increasingly by the medical departments of large companies for preplacement screening and for serial measurements for routine medical surveillance of workers exposed to respiratory hazards. The passage of the Federal Coal Mine Health and Safety Act and the Occupational Safety and Health Act will lead to a great increase in these practices. Also taking place at present is a vast amount of epidemiologic research into the causes of respiratory impairment and disability.

The Committees’ call for action was also partly due to bad “electronic spirometers” and to different methodologies used by different labs at the time.

… a significant minority of spirometers are inaccurate and technically unsatisfactory, and their use leads to confusing and spurious results. For example, the inadequacies of certain electronic spirometers have recently been the subject of some comment. It should be stressed, nevertheless, that these strictures should not be considered as a general condemnation of electronic spirometers. In addition, different laboratories use different routines for performing spirometry; …

It was obvious, however, that any spirometer should be capable of BTPS conversion and should be checked daily. In their recommendations for spirometers, the Committees said:

8. An instrument to be used under conditions of varying ambient temperatures and barometric pressures should incorporate a temperature sensing device such that the flows and volumes recorded can be corrected to body temperature saturated with water vapor (BTPS).

9. The instrument used should provide a tracing of either flow versus volume or volume versus time during the entire forced expiration. Instruments that provide electrical outputs proportional to volume and/or flow should be checked daily for calibration.

It wasn’t until May 1979 when the Snowbird Workshop on Standardization of Spirometry was published in the American Review of Respiratory Disease. It outlined standards for measuring VC, FVC, FEVt, FEV1, FEF25-75%, V and MVV, and margins of error for spirometers that were to measure the parameters. And the test signal for Vital Capacity was to be a calibration syringe.

The test signal for VC will be a calibration syringe with a volume of at least 3 liter[sic] or suitably calibrated spirometer tested over the volume range of the instrument.

After two updates, in 1987 and 1994, a joint task force of the American Thoracic Society and the European Respiratory Society issued the latest standards in 2005. The volume of the statement grew to 20 pages (in PDF) from 11 pages (only on paper) in 1979, and became the de facto international standard.

In the 37 years since the first standards were published, the need to check a spirometer against a known volume for calibration hadn’t changed.

The syringe used to check the volume calibration of spirometers must have an accuracy of ± 15 mL or ± 0.5% of the full scale (15 mL for a 3-L syringe), and the manufacturer must provide recommendations concerning appropriate intervals between syringe calibration checks.

And A-M Systems’ commitment to producing accurate, high-quality syringe hasn’t changed either. Our 3-L calibration syringes boast a volume accuracy of ± 0.25%, or 50% better than the 2005 standards require, and includes adapters for many common spirometers.

[This is part of a series covering the highlights of our journey over the past 40 years. Thank you for supporting and following us.]

← Prev: Free Shipping on Select Pulmonary and Respiratory Supplies Next: 'A-M Systems Had It' in 1983 and We Still Do →