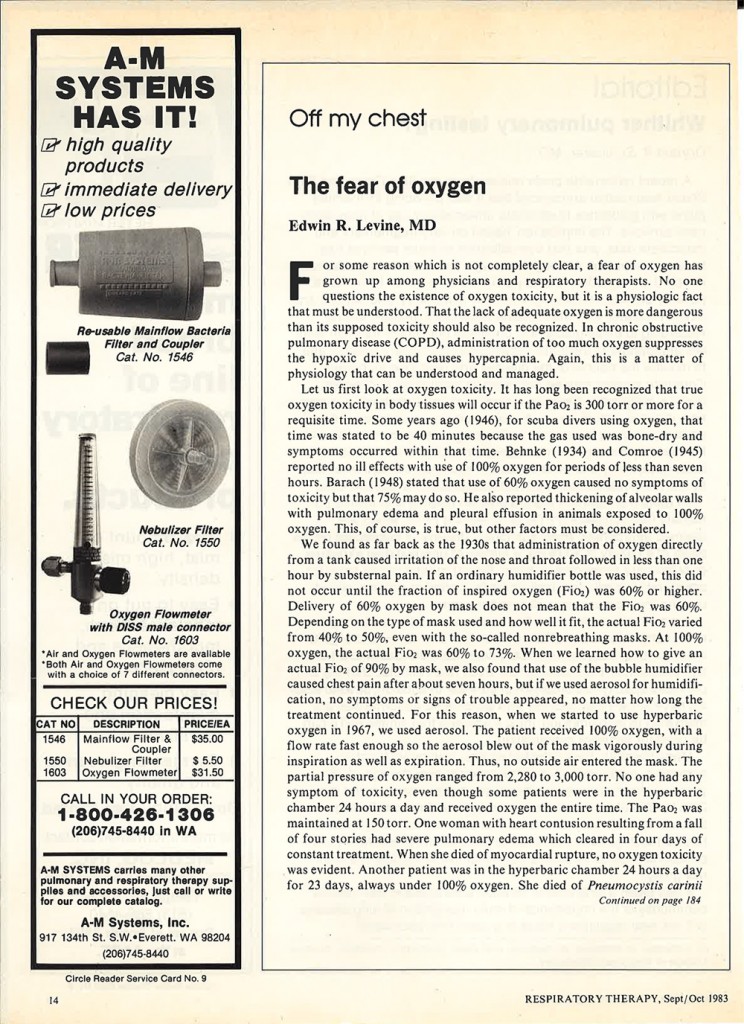 We’ve been showcasing some of the highlights of our 40-year journey from humble beginnings to a dynamic international company. This post is the third in that series.

This week’s showcase is a print ad titled “A-M Systems Has It.” It appeared on page 14 of the Sept/Oct 1983 issue of Respiratory Therapy. The ad shows a reusable Mainflow bacterial filter, which we still carry, an inline nebulizer filter, and an oxygen flowmeter. By this time we were based in Everett, Washington.

The ad shared the page with an article by Dr. Edwin R. Levine, who was among the early advocates and a pioneer of oxygen inhalation therapy. Dr. Levine trained some of the first ‘technicians of inhalation therapy,’ helped form the Inhalational Therapy Association (ITA) in 1946, and remained its medical advisor for nine years. The I.T.A. in 1982 would become the American Association for Respiratory Care.

In the 1983 article, The fear of oxygen, Dr. Levine airs his frustration that fear of oxygen toxicity might undo four decades of advances in oxygen therapy.

For some reason which is not completely clear, a fear of oxygen has grown up among physicians and respiratory therapists. No one questions the existence of oxygen toxicity, but it is a physiologic fact that must be understood. That the lack of adequate oxygen is more dangerous than its supposed toxicity should also be recognized. In chronic obstructive pulmonary disease (COPD), administration of too much oxygen suppresses the hypoxic drive and causes hypercapnia. Again, this is a matter of physiology that can be understood and managed.

What Dr. Levine labeled as a ‘fear of oxygen toxicity,’ perhaps a bit too broadly, was pervasive. And that fear led to “aggressive measures” to avoid it, according to Dr. David J. Pierson, in a brief monograph published in 2013.

High concentrations of inspired oxygen may play a role in such [ventilator-related lung] injury, but aggressive measures to reduce them in order to avoid oxygen toxicity—which dominated ventilator management in previous decades—have been tempered in the present era of lung-protective ventilation. Although some additions and modifications have emerged, much of what we understand today about oxygen in respiratory care is owed to the pioneering work of Thomas L Petty more than 40 years ago.

One of Dr. Petty’s five attributes that defined his enormous contribution to the respiratory care and oxygen therapy, Dr. Pierson wrote, was his realization that commercial respiratory care industry was critical to designing innovative medical devices and improving patient care. And Dr. Petty’s work with medical device manufacturers led to advances in oxygen therapy and mechanical ventilation we see today.

Since our birth in 1976, we’ve worked with clinicians and patients to bring pulmonary products that not only exceed international standards but also improve efficiency. Pulmonary function test kits saved the time required to set up for each patient by combing popular disposable items in a single bag. Design improvements, seen in the latest VBMax PFT filters, wouldn’t have been possible either without feedback from clinicians and patients.

And we still have it, in stock, for same-day shipment.